Flea markets exist around the world; in Japan these markets are called shrine sales and take place at (surprise!) shrines on a regular schedule. Last week I decided to check out the goods at the Kanagawa Tenmangu Shrine Sale, more commonly known as the Machida shrine sale after the nearby neighborhood and train station. It’s usually held on the first of the month, except when it’s not. So check the schedule before heading out.

I arrived by train with a group of veteran shrine sale goers and started wandering. I did my first lap of the stalls, assessing the selection and general prices, making mental notes on what to come back for, and deciding whether or not I considered the prices fair. I’m not much of a haggler. Some people love it, but I don’t. When I see a price I just think whether or not that item is worth that price to me, and I don’t really care about getting the absolute lowest price possible. If it’s more than I want to pay then I just walk away.

I came with three things on my shopping list: ikebana containers, both low and high-sided; kokeshi dolls; and a kimono or two.

Ikebana containers proved surprisingly difficult to find. You would think that any flea market would have lots of kinds of ceramics, but the ikebana vases were few in number, not terribly attractive, and surprisingly expensive. I did find one dish that I liked, and it only cost 1000 yen (around $8.50 USD).

Kokeshi dolls proved much easier to find. Shortly after moving to Japan I heard other moms talking about collecting kokeshi dolls, and at first I didn’t really see the appeal. I only saw the contemporary, somewhat garish ones like this and didn’t care for them. Then I started noticing vintage kokeshi dolls with their natural wood colors. As I visited expat friends in their homes I saw lovely arrangements of kokeshi dolls on mantles and imagined how nice that would look in our sealed fireplaces in our Washington, DC house. So I set out to buy my first round and had no trouble scoring this collection below.

On the train ride to the market, my friend Marie-Claire told me to smile when I shop. “It’s the Beautiful Woman Discount!”, she declared. I looked at her skeptically, but guess who benefitted from said BWD on her first purchase. I chose four kokeshi dolls and showed them to the vendor for the total price. They were marked between 300 and 700 yen each, and the fair price I had in mind was roughly 500 yen a piece. So when he said 2500 yen for four dolls I first thought, meh, a little high, but I do have a really big doll in there. So I started getting out my money without saying anything and the vendor quickly said a few words in Japanese which included kirei (beautiful) and the new price of 2000 yen. So apparently he’s even a worse haggler than I am. He spoke only in Japanese and I understood the prices he gave as well as his compliment–so perhaps that very rudimentary Japanese comprehension helped too. 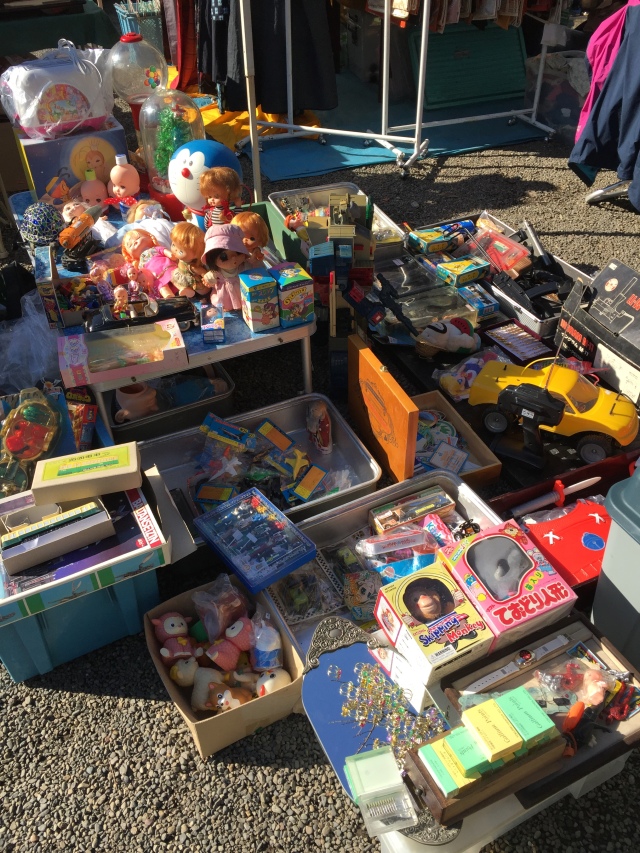 The kimono shopping proved a little more daunting simply because there were so many choices. I settled on a table that had an assortment for 1000 yen and found this beauty. It’s a gorgeous, slippery silk and feels just incredible–definitely worth 1000 yen to me, if not more.

I saw a scrum of Japanese women elbowing their way through the huge pile of kimono pictured below, but I felt too intimidated to join in.

Then I saw a smaller pile in a different area and stepped up. This green kimono with a Japanese maple motif immediately caught my eye, so I pulled it out and asked the price. “hyaku [100] yen ,” the vendor replied in Japanese. I looked at the silk kimono and repeated, “hyaku yen?” several times. 100 yen is about 85 cents US; you can’t even buy a bottle of water for 100 yen. It’s also silk, though a slightly coarser texture than the other one that I bought. 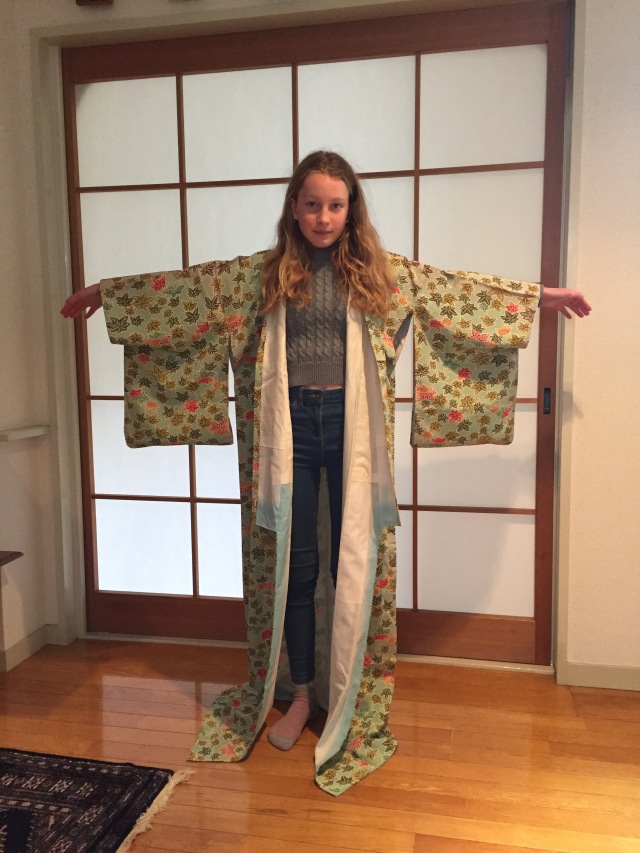 This random assortment of sacred-ish objects jumped out at me immediately. Polacy! Who sees why?

Here’s a close-up. That’s right: Our Lady of Częstochowa visits shrine sales too!