As loyal martyaki readers may recall, last spring I visited the the famous wisteria in full bloom at Kawachi Fuji-en garden in Kitakyushu, about 1000 km away from my home in Yokohama. This year I decided to check out the wisteria hysteria a little closer to home, heading to Ashikaga Flower Park outside Tokyo. My friend Jeannie joined me, and we lucked out with amazing blooms and perfect weather for our flowery road trip.

We decided to pack a picnic lunch, and I brought a folding table and chairs. As we arrived and parked in a remote parking lot we decided whether or not to bring our food with us. We opted to leave it in the car instead of carrying it around, figuring we would sort out lunch later.

We arrived in the park and saw show-stopping blooms right away. 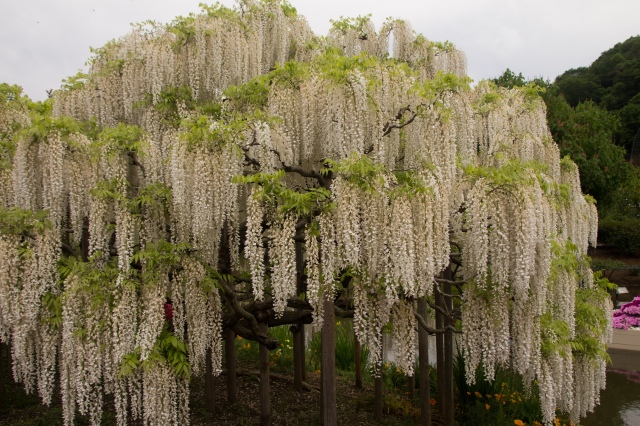 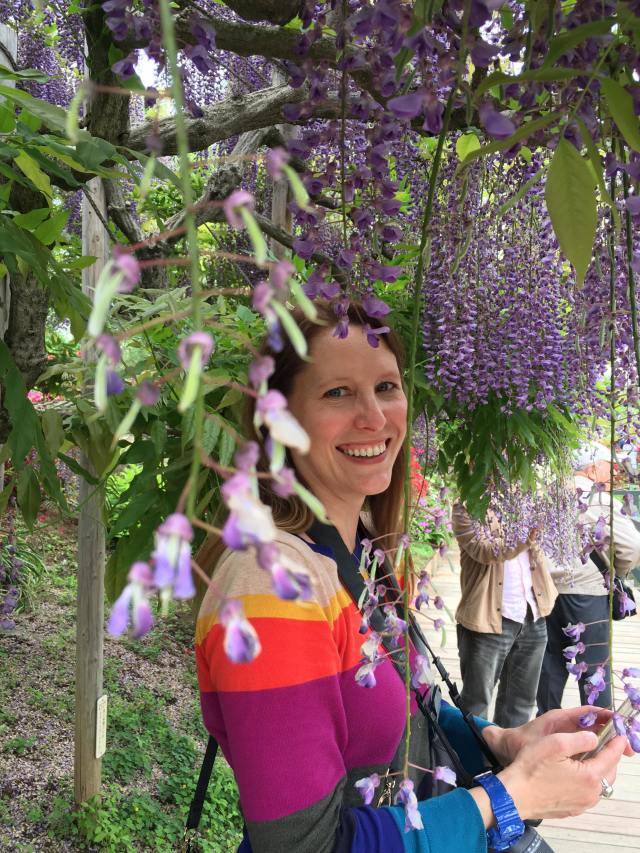 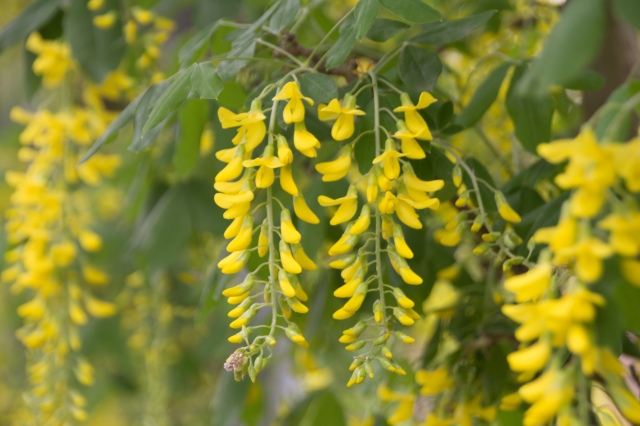 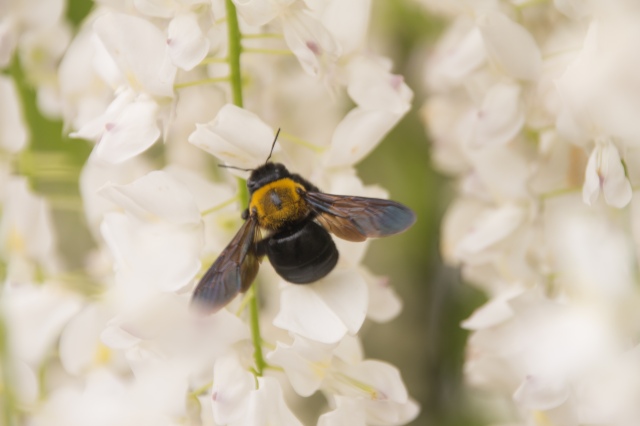 Large purple wisteria bloomed and peaked the week before; we arrived in time for the height of white wisteria season. As with Kawachi Fuji-en, Ashikaga left me pretty much speechless. There simply aren’t words to describe the incredible beauty, the intoxicating smell–all of it. While the gorgeous fragrant panicles of white blooms inevitably catch the visitor’s eye first, I found myself drawn to the interiors of the trees’ canopies. The intricate, gnarled vines illuminated by the soft glow of the surrounding flowers…just amazing. 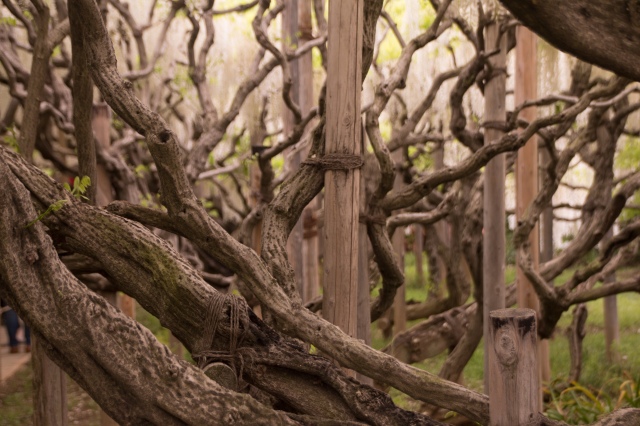 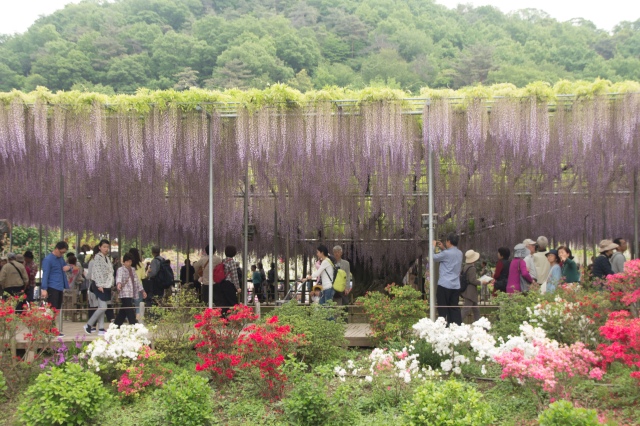 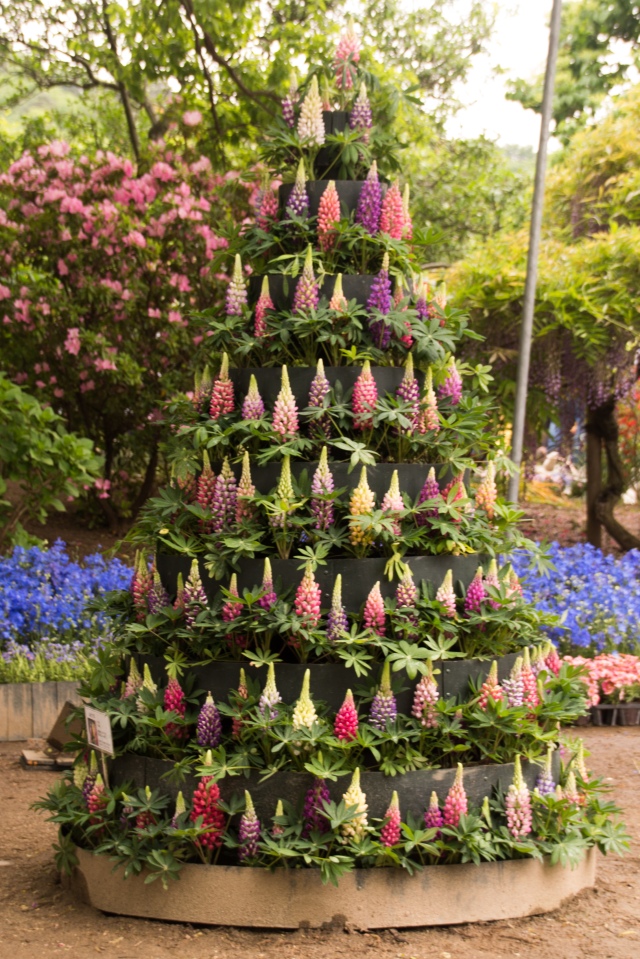 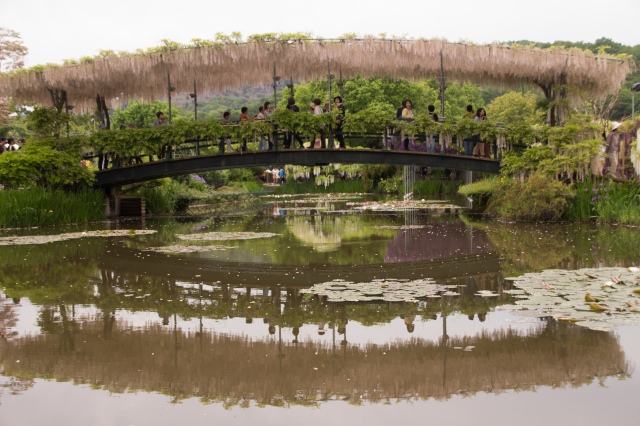 During our visit we noticed many seating areas of tables and chairs where visitors enjoyed both picnic lunches and food purchased on site. We also saw lockers near the entrance that would have been the perfect place to stash our lunches instead of carrying them during our visit. Live and learn, we mused. Then we headed to car to enjoy our own feast. 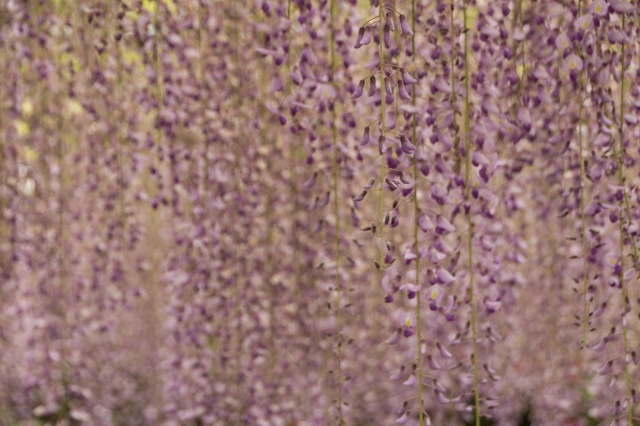 The walk back to the park was far enough that we decided to set up a tailgate right in the parking lot. So Jeannie and I laid out our spread and sat down to enjoy our lunch. The other cars that had completely surrounded ours when we arrived had departed, leaving ours the only car around. 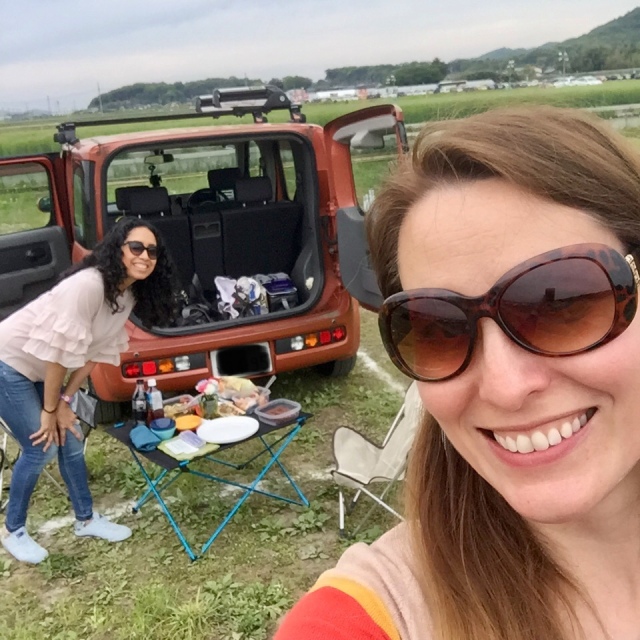 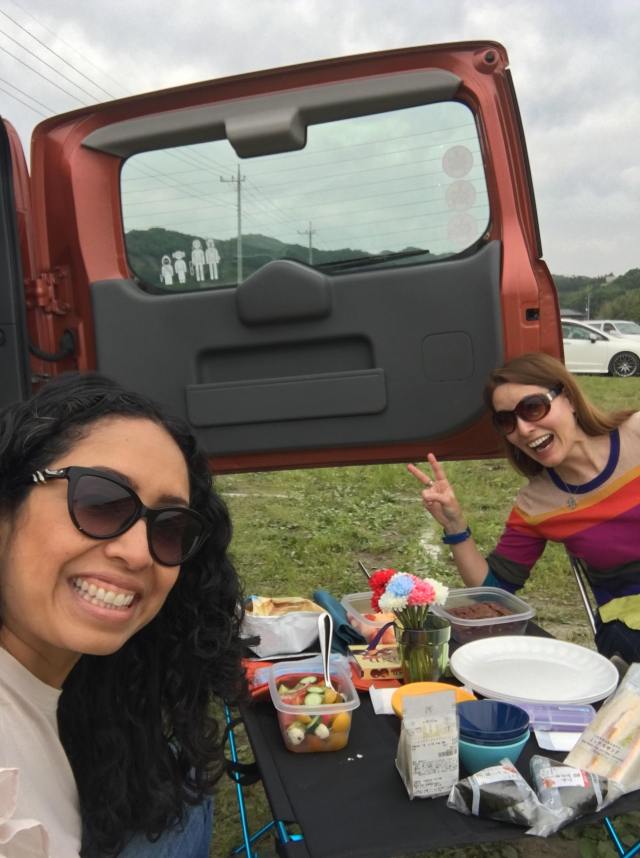 Within a few minutes a pink-shirted parking attendant arrived. Despite my three years of Japanese lessons I didn’t understand too many of his actual, you know, words. But his body language was pretty hard to miss, especially the crossed forearms that Japanese people tend to display to uncomprehending foreigners. “Cars, do you understand?”, he asked in Japanese. “Yes, I understand,” I replied, also in Japanese. “But there are no cars.” We sat entirely by ourselves, surrounded by empty spots. “We will finish eating in ten minutes,” I added.

He looked utterly flummoxed, then pantomimed for us to eat fast. Clearly he expected us to apologize meekly and start packing up right away. But alas–nothing stands between a hungry gaijin (foreigner) and her sandwich.

Last Christmas, Mark lovingly gave me the most romantic of gifts: my very own 23andMe ancestry kit! Because nothing quite says I Love You like a vial of spit. So I filled my vial and sent off the sample, eagerly awaiting my results.

Meanwhile, I decided to use a story about the popularity of commercial DNA testing as reading material for the English class I teach twice a month. My students are Japanese seniors who all speak excellent English, and we read and discuss a selection chosen by me or the Japanese moderator of the class. I chose this story from National Geographic, which explains how it’s possible for full siblings with the same parents to have different DNA ancestry.

Before my results came back, I speculated with Mark and the kids about what I would find. Since both of my parents are Polish immigrants, I expected a fairly high Polish percentage–say, 90% or more. And given Poland’s rather non-mountainous east-west borders, unfortunate placement between aggressive neighbors (I’m looking at you, Germany/Prussia, Russia, and Austria-Hungary), and overall turbulent history, I also guessed some German, a touch of Ashkenazi Jewish, and a smattering of Mongolian thanks to galloping invaders across the steppes. The Boy in particular hoped for a trace of Asian heritage to justify his love of sushi–not that Mongolians are particularly known for fish-eating, but whatever…

So anyway! The results came in, and I was shocked. Shocked!! Now most of you Americans out there with a more American-like mix of assorted continents in your family history will look at this think, Wow, what a shocker that she’s 99.9% European. But! Check out the trace results below. Only 78% Polish? Italian? Iberian? Balkan? British-Irish? How did those people get to Poland, and when?!?

This next view provides at least some clues. The graph below estimates roughly when an ancestor with a given heritage appeared in my family tree.

So since 1850 or so my ancestors were all Polish-Polish. No surprises there. And around 1850 or a little earlier, there was a French or German (though probably German) ancestor. Also no surprise, since my maternal grandmother’s maiden surname sounds like a Polish version of a German name.

So what happened in 1700-1820 that might have brought Brits, Irish, Balkans, Iberians, and Italians to Poland?

I started by asking one of the smartest people I know for some ideas: my dad.

Ted pointed out that Scots came to Poland in large numbers in the 15th century thanks to the Poland-Lithuanian Union’s religious tolerance. This story by the Krakow Post provides a fascinating account (and who knew that Prince Charles Stuart, or Bonnie Prince Charlie, was half Polish?!? I didn’t.). So Ted speculated that perhaps others throughout Europe came to Poland for similar reasons. A solid guess, I think.

The next idea came over beers at the club on a Friday night. My British friend Nic mentioned the Napoleonic Wars and the wide swath of Europeans that ended up all over the continent. Those conflicts lasted from around 1800 to 1815 and involved pretty much every country in Europe, stretching as far east as Russia. There was no Polish state at that point in history; Russia, Prussia (Germany, basically), and Austria-Hungary carved up Polish lands between them in 1795, and there was no Poland at all until 1918 and the end of World War I. To me this seems like the mostly likely explanation of my Italian, Iberian, Serbian, and British-Irish ancestors who might have charged across Polish lands as they marched on Russia.

One last idea came from random Google-ing: the Industrial Revolution, which started in 1750 in Great Britain, then spread to the rest of Europe and the world. So maybe some enterprising Brits set out eastward with their fancy mechanized methods…?

So back to English class! My students buzzed with excitement as I passed around a report with the two images above plus a map of Europe. I presented my three theories as outlined above, which led to great questions about European history. The students had never learned that Poland didn’t exist from 1795 to 1918 and were fascinated to hear that the creation of a Polish state was one of Wilson’s Fourteen Points at the end of World War I. One student asked what Ashkenazi Jewish meant, so I briefly explained the difference between Ashkenazi and Sephardic Jewish geography, foods, culture, and languages. I told them that The Boy was dismayed to find not even a trace of Asian ancestry, and they all laughed. It’s all of the history of Europe, right on this page!, one student said.

The Japanese class moderator mentioned that she has known many Americans living in Japan who have been fascinated by their roots, especially Americans with Japanese ancestry. She told of a previous teacher of the English class who traveled around Japan to learn more about her Japanese heritage. Then she posed the question to the students that I wanted to ask as well: Would any of you take a DNA test like this?

She called on one student, who replied: I know I’m Japanese, but what if I had a little Mongolian ancestry? I would be shocked. We all laughed. While no one stated a desire to take such a test, we started speculating as a group about what other DNA might appear among mostly-Japanese people. Russian in the north. Chinese and Korean, everywhere. Portuguese and Dutch in the west, where both trading enclaves existed for centuries. Then we went on to discuss sub-groups within Japan, such as Okinawans in the south and Ainu, the indigenous people of Hokkaido, Japan’s northern-most island. While the students were happy to discuss these ideas in general terms, no one seemed eager to find out if his or her own family history reflected, say, a smattering of Portuguese trader DNA.

But who knows. Perhaps someday soon the growing popularity of DNA ancestry testing will help knock down some of those taboos. And maybe the Japanese will embrace their inner Portuguese trader after all.