We’re in Washington! The kids and I arrived last week, and I delivered them to summer camp last Sunday. I assume that they are having fun, but I don’t know since neither child has responded to messages or care packages (ingrates!). The camp director assures parents that no news is good news, and homesick children never miss a chance to reach out to parents.

While not-receiving messages from the kids, I have been catching up with family and friends and revisiting some favorite sites at home. The first stop: The National Gallery of Art, about a mile from our house.

On Tuesday my dad and I met at the National Gallery and headed straight for my favorite painting: Leonardo da Vinci’s portrait of Ginevra de’ Benci. It’s the only da Vinci on public view in the Americas–take that New York! Unlike the insane crowds at the Louvre to “see” the Mona Lisa behind, glass, barriers, and hundreds of fellow tourists (and pick pockets)…. 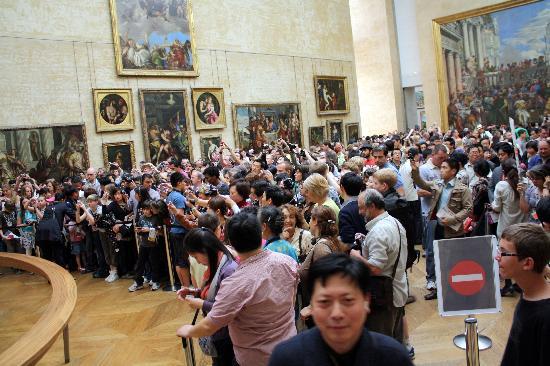 …the gallery with Ginevra usually looks like it did on Tuesday.

The painting is on a panel, not canvas. The backside of the panel is also painted and on display, and you can walk around to view both sides.

A guard stands off to the side, and the occasional group comes through on a tour. But most of the time the gallery is pretty empty, and I can stand face to face with Ginevra for as long as I want. So I do.

I love having a favorite painting that I revisit once or twice a year. Every time, I stand there and marvel at how a brush and paint could render such perfect skin, and the minute curls of hair. I think about what I’ve experienced since I stood there last, for better or worse. It’s just wonderful, and grounding. If you don’t have favorite painting that you revisit–go find one!

After Ginevra we hit some other favorites: the Rembrandt and Vermeer galleries, and the Impressionists. I saw the Gauguin paintings and wondered about the woman who attacked a painting several years ago because she didn’t like the half naked ladies depicted.

Fun fact about Gauguin’s nudes! Tahiti was fully Christianized by the time Gauguin arrived, and the Tahitian ladies wore mostly neck-to-ankle Christian missionary gowns called Mother Hubbards. So he made up the whole nude thing. He returned to Europe with several dozen paintings but only sold four because the public considered his work vulgar. Those same paintings sell for tens of millions of dollars today.

Back to the attack–I asked a guard about it, and she was there that day! “Was it kind of exciting?” I asked. “Oh yeah!” she replied. I asked her which painting it was and she led me to this one.

The media coverage from the time indicates that a different painting was attacked: Two Tahitian Women, which was on loan from the Metropolitan Museum of Art in New York. Can you imagine that awkward post-attack phone call between museum directors? Thankfully the damage to the painting was minimal, with only minor scratches that were easily removed. The guard added that the attacker won herself a lifetime ban from the National Gallery: “We have her picture everywhere!”.

While wandering the galleries I noticed easels set up throughout and one easel with a painter hard at work. I didn’t bother him while he worked, but a few minutes later he sat on a bench taking a break and I chatted him up. He described NGA’s Copyist Program, which gives artists the chance to paint from original masterpieces. The artist can come in one day per week for as long as it takes to finish the painting. NGA has offered this program since its opening in 1941! Of course there are rules, background checks, and so on. But still–dream big, kids!