Tessa’s passport expires in April, so last week the family headed into Tokyo for an expat ritual: renewing the passport at the Embassy. It was my first time ever visiting a U.S. Embassy, so I looked forward to the experience in the Check In the Box sense.

We headed into Tokyo knowing that rush hour was in full swing. On the first train things got squishy. I snapped this picture of Tessa, thinking, “Wow! Super crowded train!” I had no idea of what was to come. On this train I could still reach into my bag to get my phone.

On the next train….wow. We were already packed in tight when I saw the doors open and about another trainful of passengers waited to board. They all did. I didn’t see any of the famous train pushers, but frankly the crowd self-pushed. It was so crowded that the following facts about our train ride are all true:

OK, the last one’s not true–but it probably would have worked. Mark did forcibly create a bubble around Cy because he was completely smashed; in the photo below, that gray herringbone against Cy’s face is neither Mark nor I. 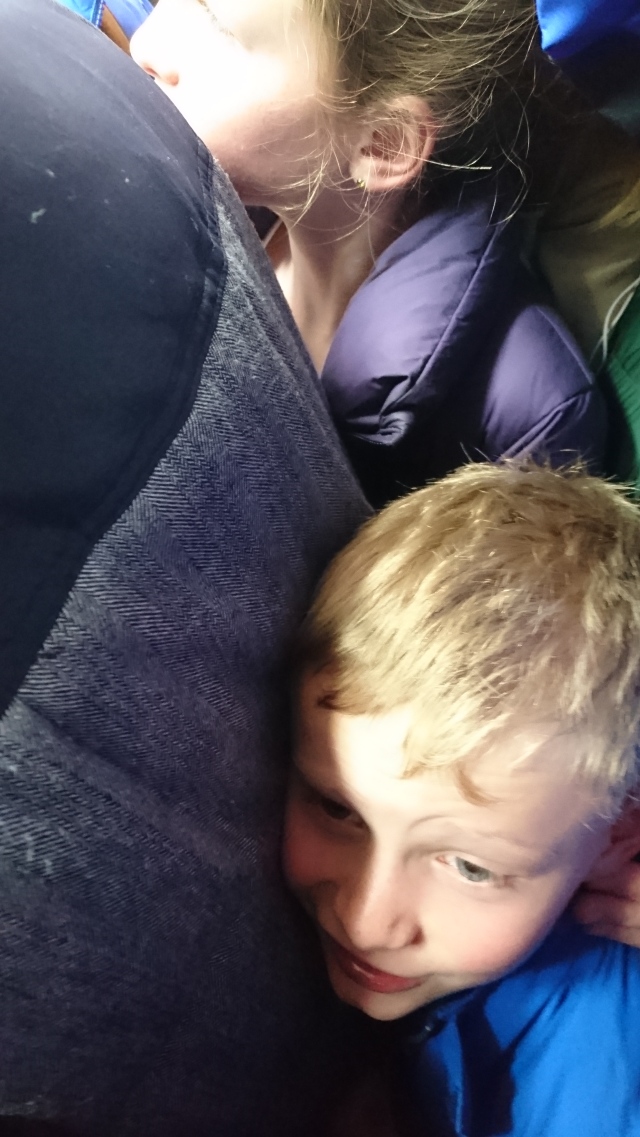 Train excitement over, we arrived in the Roppongi neighborhood of Tokyo and home of the U.S. Embassy. The street right in front of the Embassy is closed to traffic, and Japanese security guards checked our documents and cleared us to move to the next stage. We walked up to the building’s entrance and saw a huge line of people with umbrellas to ward off the damp, chilly rain. Our appointment was ten minutes out, and I briefly panicked as I mentally calculated the Way Longer Than Ten Minutes line. Then I noticed the sign indicating that the line is for people waiting for visa interviews, and U.S. citizens were to go around the line. As we approached the security guards stopped screening visa applicants and put us through instead. The process resembled airport security screening, with one important addition: no electronics of any kind were allowed, including cell phones and Kindles.

Honestly I felt odd going to the front of the line while non-U.S. citizens waited, and waited. I felt very self-conscious of their stares while we got priority. I’m the child of immigrants, and I could have just as easily been born in Poland instead. But since I was born in Chicago, I was handed this golden ticket called U.S. citizenship. I understand the reason why citizenship exists, and I’m not suggesting that all country borders vanish and people go anywhere they want; obviously that wouldn’t work out very well. I just felt strangely privileged by an accident of birth.

Once we made it inside past the blast doors we headed to a row of windows that strongly resembled any Department of Motor Vehicles in the U.S. I even headed to a separate cashier window to pay, just like the DMV. I returned to the passport clerk where I handed over our paperwork, presented the child, and raised my right hand to attest to the truthfulness of all information in the application. After about ten minutes we were on our way. By the way in the U.S. passport applications are filed at the nearest post office; there are several passport agencies around the U.S., but you only go to one of those if you have imminent travel, which you must prove. I’m a Renew in Advance kind of gal! 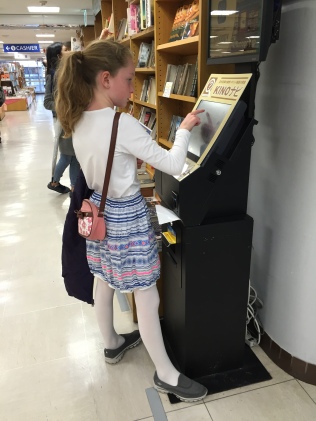 Checking out the selection at Kinokinuya Books

After the Embassy we headed Kinokinuya Books with the largest foreign book section in Tokyo. We have Amazon U.S. available to us, but we still miss the fun of browsing a book store. 15,000 yen (about $140) later, we headed out for lunch at a Mexican taqueria called Guzman y Gomez in Harajuku. It’s the only location in Japan, but the chain is originally from Australia. That’s right: we ate at a Mexican restaurant, from Australia, in Japan. As one does. It was pretty good and scratched that taco itch, so to speak.

After lunch the boys headed home while Tessa and I strolled Takeshita Dori, as we did a few months ago. We window shopped but didn’t buy anything this time around. As we left I snapped the picture below of Tessa and tried to convince her to flash the peace sign as all Japanese kids do (and many adults). She refused: “No! It looks awesome when Japanese kids do it, because they’re all ‘peace.’ But when an American does it, it looks like you’re ordering or something. ‘I’ll take two.’ Won’t do it.” I laughed, but she’s kinda right.