OK, it’s probably not fair to call my Japanese oven crappy. Perhaps “not suiting my needs, or bakeware” is a more diplomatic description. I’ve used the oven a bit since moving in about six weeks ago, but until now I haven’t mustered the courage to bake for real. Elder Spawn turns ten this weekend, and we’re hosting eight of her friends for a Halloween-themed birthday party. One of the activities includes decorating sugar cookies, which necessitates baking said cookies beforehand.

When packing up my U.S. kitchen back in July, the cookie cutters somehow stayed behind. The bin of pastry bags and tips that sat right next to the cookie cutters made it–but whatever. The Navy Exchange on base carries all kinds of housewares, and I picked up this trio of cutters for just under four dollars. Aren’t they the cutest?

I especially like them because the shapes will be easily recognizable after the cookies are baked, even if the cookies puff up a bit. Overly intricate cookie cutter shapes irritate me because it’s often hard to tell what the shape is supposed to be. (And yes, I spend far more time thinking about this than normal people should.)

Mixing up the dough with my trusty standing mixer is the same at home and in Japan, right?

Not so fast. Darn those grounded plugs!

Japan’s electricity is roughly the same as in the U.S.–100V versus 110V at home. Most things run the same, only a little slower. So phones and computers take a little longer to charge. Plug-in clocks don’t work, though–they run slow and lose time.

Back to the outlets. Most Japanese outlets lack the third hole for the grounding plug. Thanks to the American taxpayer, we’re covered! Meet my friend the Trans Pal (Snicker. I know, right?). The Navy housing office issued us two of these transformers, allowing us to plug in up to two grounded appliances at once, four if we use both transformers at the same time! Livin’ the dream.

So I mixed up my cookie dough with my trusty, tricked out KitchenAid mixer and set the dough in the fridge to firm up.

On to the next hurdle: the baking sheet.

You civilians call it a cookie sheet. We pros call these sheet trays, and usually by size. If you’ve ever ordered a sheet cake from the grocery store bakery then you have likely heard of full sheet, half sheet, and quarter sheet sizes. Full sheet pans fit in commercial ovens; home ovens usually hold a half sheet pan without trouble, and you can typically bake two or three sheets of stuff at a time depending on how many shelves your oven has.

The Japanese oven has one wire shelf, and the only Western sheet pan that fits is a quarter sheet. The half sheet is just a hair too long.

That wire shelf doesn’t pull out and stay there. You know that annoying extra bump in an American oven that you have to clear with the oven rack by lifting the rack up, and it’s always such a hassle and you can’t get the ^%#$%&@!! oven rack in correctly most of the time? That bump keeps your oven rack sticking straight out and parallel to the floor when you slide out the rack. My oven lacks this bump, and the oven rack falls if you pull it out. If you happen to have, say, a tray of hot lasagna on the rack while making this discovery, you likely have a ER visit in your near future for the burns on your ankles from molten cheese. Thankfully I learned this lesson with a baguette I was toasting up. A few crumbs on the floor, a Five Second Rule application…and warm bread and lesson learned!

In addition to the single wire rack, the Japanese oven came with these two solid metal shelves. My expat friend who is American but has lived in Japan for over 20 years tells me that this is the baking sheet. I can’t imagine what I’m supposed to bake on it though, since it’s not quite flat.

So my choices: bake one quarter sheet of cookies at a time, which will take me approximately 47 years of bake time; or bake two not-quite-flat sheets at a time. I opted for the not-flat sheets, two at a time.

Actual oven operation takes some getting used to. I push  the on button, dial up the temperature (in Celsius, of course), set the timer, and hit start. When the timer runs out or the oven door is opened the oven immediately shuts off. Every time. It’s irritating.

The result? Meh. The oven is so small that it’s impossible to keep the cookies away from the oven walls, which are the hottest parts of the oven. So the resulting cookies baked unevenly, as you can see below. Not terrible, but not great either. If the bake time were longer I would rotate pans, but this doesn’t work with short bake times like eight minutes.

Not bad for a first effort. Bake on! 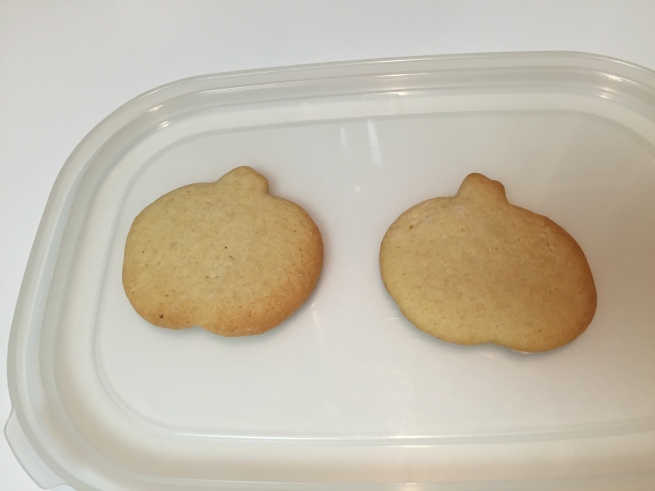