Last weekend Mark and I donned the tux and gown and headed over to our club, the Yokohama Country and Athletic Club (YC&AC) for Burns Night. What’s Burns Night, you ask? I hadn’t heard of it myself until moving to Yokohama. So let’s start with a little background….

Robert Burns was a Scottish poet (“Oh my luve’s like a red, red rose….”) and his birthday falls on January 25. So on the weekend nearest that, Scots around the world gather to toast ole’ Rabbie with whiskey, haggis, Highland dancing, and bagpipes. Kilts are encouraged and black tie tolerated if your man doesn’t feel like baring the legs in late January. YC&AC’s first members included plenty of Scots, so Burns Night has enjoyed a spot on the YC&AC social calendar since the club’s founding in 1868. YC&AC calls its celebration the oldest Burns Night in Japan.

I suspected Scots outside of Scotland tend to celebrate Burns Night more than those living in the home country. My Scottish friend Jason confirmed this. Picture a watered down Groundskeeper Willie accent from The Simpsons when you read this next part: “Mostly awld faaahrts in cloobs git togather far it.” Meanwhile my friend Iain–born in Scotland, reared in Canada, and both a wearer of kilt and player of bagpipes–disagreed, stating that plenty of people in Scotland, both young and old, raise a glass to Dear Rabbie.

The evening includes a series of toasts and speeches, and Mark played an important role as the Whisky Bearer during the procession of the haggis. Moments before the procession began, Mark sprinted over with an important assignment for me. As the master of ceremonies stabs the haggis, a women is supposed to scream loudly. Was I willing? As if he had to ask! I warned Iain who sat directly in front of me, then let out a blood-curdling shriek as knife and haggis became one.

Mark joined the procession of the haggis bearing a bottle of liquid gold, and even remembered his response to the question, “And to whom do you toast?”. “To the piper!”, he declared.

We ate. We drank. We danced. We selfie-ed with the bagpipers. A smashing evening all around! 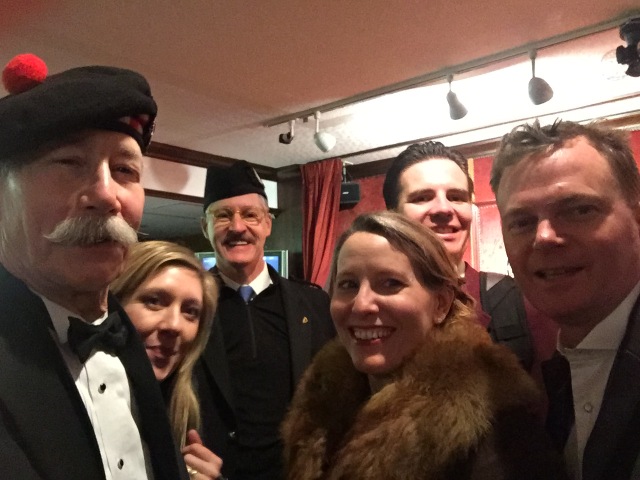 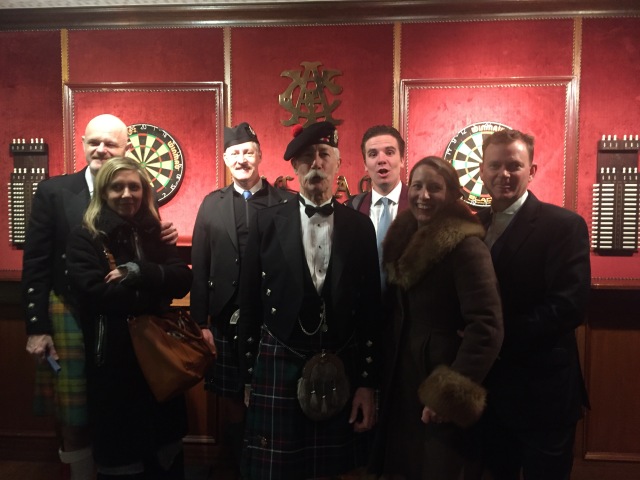 2 thoughts on “Let’s Eat Haggis; Or, Burns Night at the Yokohama Country and Athletic Club”