Every Monday, Wednesday, and Friday around 4:30PM I hear music on the street. It’s the produce man! His truck of fruits, vegetables, and eggs rolls up and sets up shop steps from our front door.

After raising the canvas flaps on the sides of his truck, he starts selling. I buy from him every other week or so, and today I mustered the courage to ask him a few questions in Japanese. I wanted to know how many years he has been coming to this spot, and I came up with “Nan-nen achira kimasu-ka?”. Maybe not 100% grammatical, but understandable, I thought. I asked Mark’s opinion: “I think your Japanese is right,” he replied, “but he’ll probably wonder why you’re asking.” 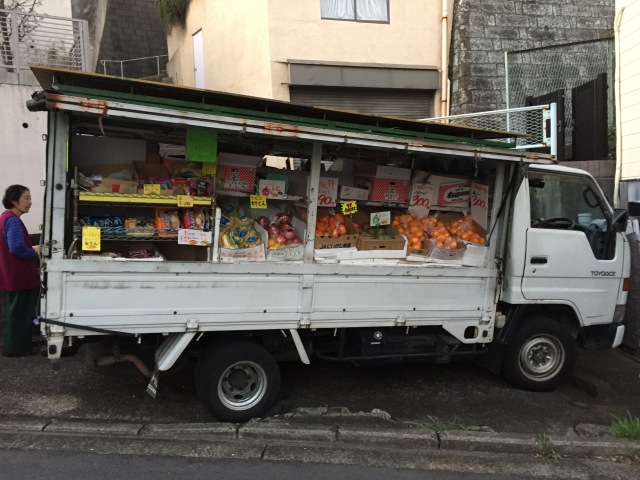 So I ambled over to the produce man and asked. An elderly Japanese woman selecting her produce chuckled. Then the produce man stroked his chin, studied the sky for a moment, and replied in Japanese, “About 40 years.” Then he clearly mistook my single Japanese question as some degree of fluency and kept talking. And talking. I understood a bit about watching babies grow up and become his customers, but not much more than that.

The truck reminds me a lot of Calomiris and Sons produce stand inside Washington DC’s Eastern Market. He even scribbles out the bill of sale on paper, just like Calomiris! But alas, no free piece of fruit for the road.