This Sunday morning the five of us attended Mass at our church, Sacred Heart Cathedral. In the afternoon Tessa headed to a friend’s birthday party while the menfolk and I set out for lunch in Chinatown.

First we stopped by a shrine and watched people make their offerings. It’s called 横浜関帝廟, which a little Internet sleuthing tells me means Yokohama Kanteibyo. We’ll just stick with The Shrine Around the Corner from Leyton House [an apartment building where several friends live].

Since our arrival in Japan Cy has discovered the awesomeness of soup dumplings, so naturally he wanted to share the experience with Grandpa Don. We chose a random restaurant in Chinatown that featured assorted dumplings in the window display….

….and started eating. In addition to the soup dumplings, we ordered shumai open-top dumplings, some sort of egg rolls with an unknown but delicious creamy filling, another dumpling with unknown filling that tasted like fish and shellfish, and ma po eggplant with a thick, spicy sauce with ground beef (or maybe pork?) all over it. Honestly I don’t think we knew all the ingredients of any dish, but for us it didn’t matter. Ordering Chinese food in Japan is not for the squeamish–or for those with food allergies.

After lunch we started wandering and stumbled across a ceramics street fair. Cy chose to take this week’s allowance in ceramic beads, as one does. I joked that next week he’ll ask for it wampum. Then I looked up what wampum actually is, remembering something having to do with currency used by Native Americans. [Let Me Google That For You: “Wampum are traditional shell beads of the Eastern Woodlands tribes of the indigenous people of North America.”]

After a lazy afternoon back at the house, we all headed out for dinner at one of our favorite restaurants, a pizza place called Luna near Yamate Station. 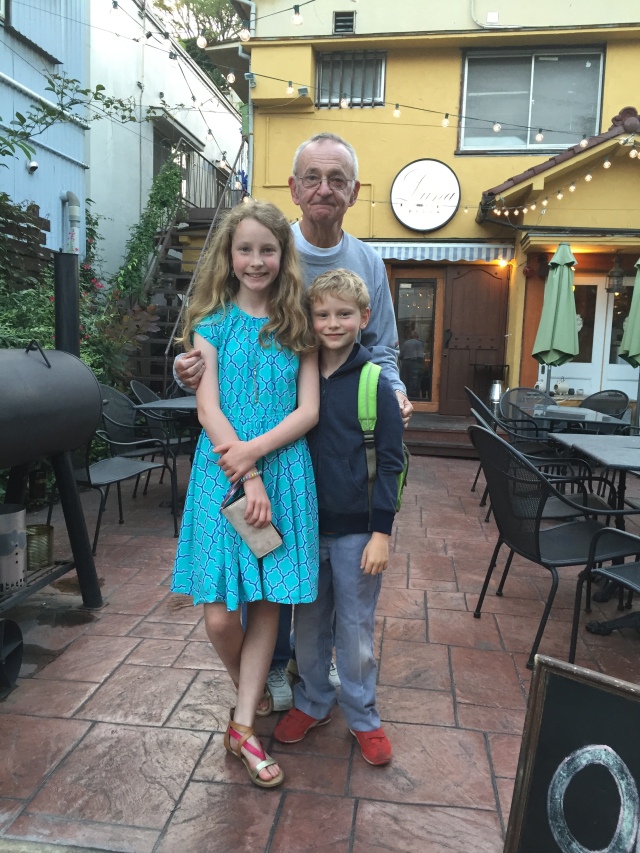