I learned something incredibly cool about Gala Yuzawa, the area we are visiting this weekend. In an earlier post I mentioned that Gala Yuzawa is one of the only Shinkansen stations right at the base of a ski resort. The other day our lodge’s owner told me that the gondola to the top of the mountain starts right inside the train station!

When I decided on this weekend trip about a month ago I quickly discovered the problem of such a convenient arrangement–everyone else from greater Tokyo wants an easy ski trip as well, and hotel rooms were booked solid. The travel agent on base couldn’t find anything within an hour’s bus ride of the station. Then I learned that the agent only looks at large properties that have contracts with them. So I went home and started searching for smaller places, and that’s how I found Bears House.

Bears House sits a 15 minute drive away from the Echigo Yuzawa Shinkansen station, and the owners shuttle guests to and from at no extra charge. The reviews on Trip Advisor gushed about the owners’ hospitality, and the price was right. There was only one catch.

There are no bathrooms in the rooms–only shared baths and toilets.

This arrangement is actually pretty common here, at least in ski areas. No other hotel rooms magically appeared over the next several days despite my slightly obsessive searches, so I booked the room and crossed my fingers.

I decided not to tell Tessa about the bathroom situation until the last possible moment–which was after check-in as we climbed the stairs to our room. I expected a shrill, screechy “WHAT?!?” but instead got a suck-the-air-through-the-teeth, barely audible “…what.” A parenting win!

I knew about the shared bath in the hallway. I did not expect said bathroom to be one floor down. “But if our room were on the second floor we would hear people using the sinks all the time!” sounded unbelievable even to my own ears, but of course I said it anyway. We noticed that some rooms had their own sinks inside, though ours did not.

Our room was best described as monastic in appearance, but also incredibly clean. I know this for a fact because I pretty much tore the room apart looking for the #%:”?@*! room key that I misplaced shortly before checkout (found it!). Not even dust under the beds!

So the rooms were for sleeping, and not so much for hanging out. The common areas were great, though. It’s very lodge-y with multiple cozy seating areas, a fireplace, games, and so on. Tessa and I both agreed that it would be great to fill the lodge’s eleven rooms with our ski buddies for a weekend. 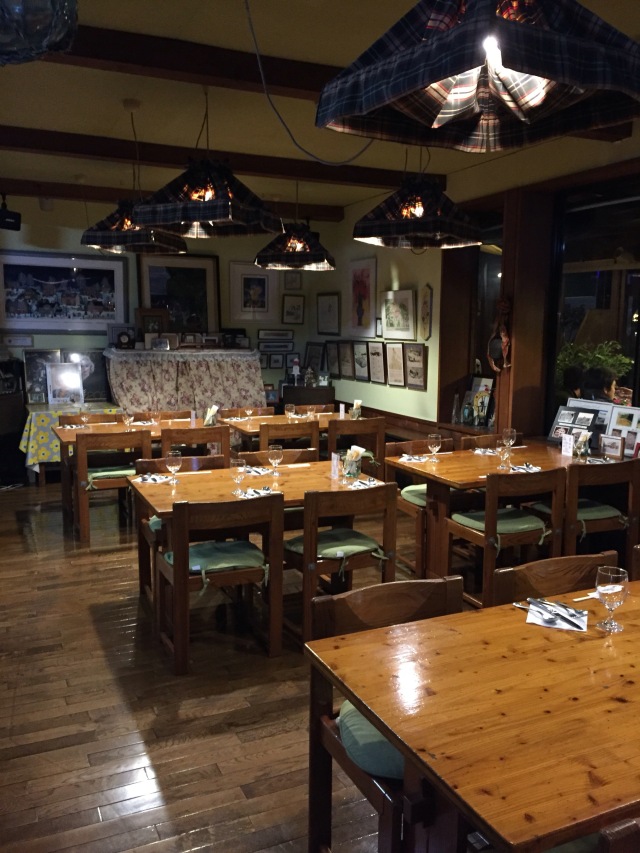 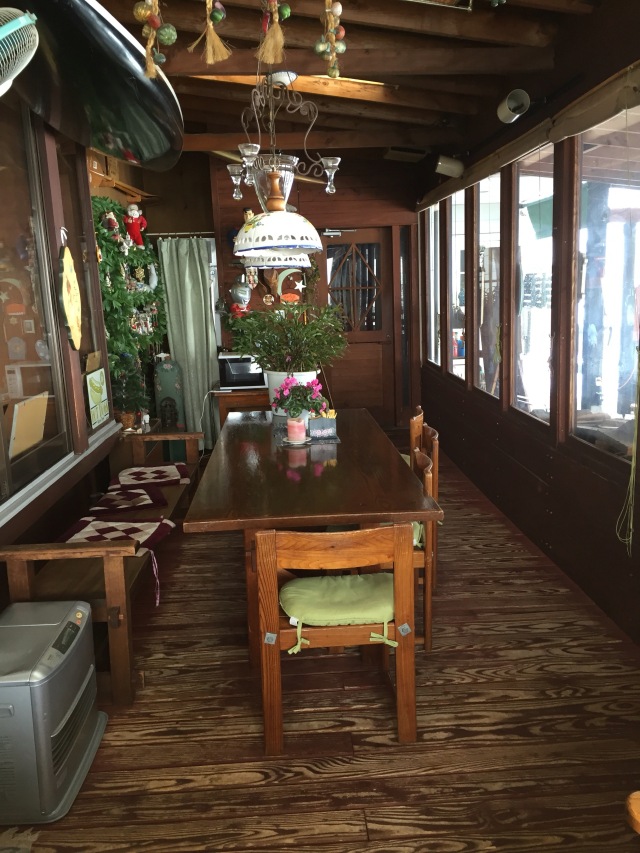 Breakfast cost an additional 1000 yen, or about $8. After our rather lackluster experience at our hotel in Hakuba in January I didn’t expect much. Instead I was presented with the spread you see below, complete with two kinds of homemade jam.

Normally Bears House doesn’t serve dinner, but on Saturday they had a full house and served up a four course meal for a whopping 2400 yen, or $20. Every dish was incredibly delicious and made from scratch. The owner did the cooking, and he could totally hang in any restaurant kitchen based on what I ate.

[CORRECTION: Elder son Kenta Uraki–who we did not meet–is the champion skier, not Papa Bear.]

Bears House sits at the base of Ishiuchi Maruyama ski resort, and we both enjoyed our first-ever ski-to-door experience. In the winter the road right in front of the lodge is compacted snow and closed to cars–so our bags got a lift from the slightly-farther parking lot via snowmobile.

While Papa Bear cooked up delicious food, his son Daichi did the shuttling, shoveling, and general hosting with a smile. He worked incredibly hard but also seemed to enjoy his job–a gracious host indeed.

The lodge also has its own small hot tub and shower area in the basement, best described as a mini-onsen. It’s the only shower available to guests, but we didn’t use it. Instead we walked five minutes to a giant and fabulous onsen right next door, Yung Parunas. Perfect, fluffy snow fell as we enjoyed the outdoor bath, and the scene looked straight out of onsen stock photos.

So would I return? In a heartbeat. Though next time I’ll try for a room with a sink for sure.

6 thoughts on “Shared Bath? No Problem!”