January 2018:  Welcome, visitors from Australia, Singapore, China, Thailand, Hong Kong and beyond! I started this blog in 2015 when I moved to Japan, and my audience is primarily family and friends who know me IRL. Yet clearly this one post about Jimbocho has filled a void for information in English. While most of my posts get views in the hundreds, this one post about Jimbocho ski shopping has been viewed thousands of times already! So I update it from time to time.

Immediately below you’ll find my original post from November 2015. Please scroll to the end for links to other posts I have written about our ski trips within Japan, and other information that I hope you find helpful.

Enjoy your ski trip to Japan! You’ll love it.

NOVEMBER 2015
We consider ourselves enthusiastic if not particularly skilled skiers. The kids have attended lessons and ski school since they were three years old, and Mark and I have taken classes ourselves. Mark needed new skis, so this past Saturday we hopped on the train to check out Jimbocho, Tokyo’s Ski Shopping Street. [For access info, scroll down.]

Jimbocho boasts 30+ shops that sell all manners of snow sports equipment from the latest high-end releases, to past years’ closeouts, and everything in between. We popped into a few places to start comparison shopping, then headed to London Sports, widely acknowledged as The Place to go for bargains (since 1966!).

[UPDATE: As of January 2018, London Sports appears to be undergoing some sort of renovation, as the store occupies a fraction of its usual footprint. Hopefully it reopens to its original size soon, or maybe bigger and better!] 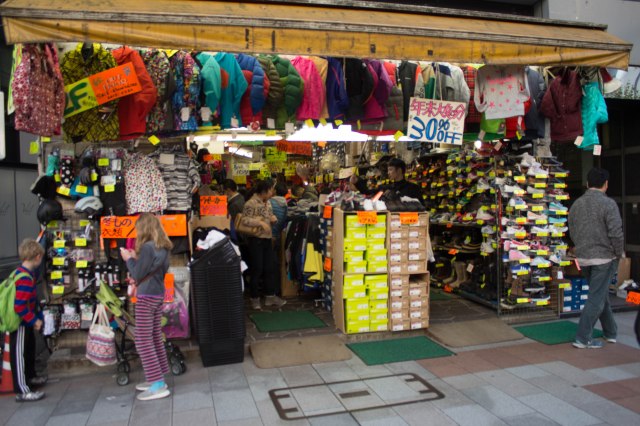 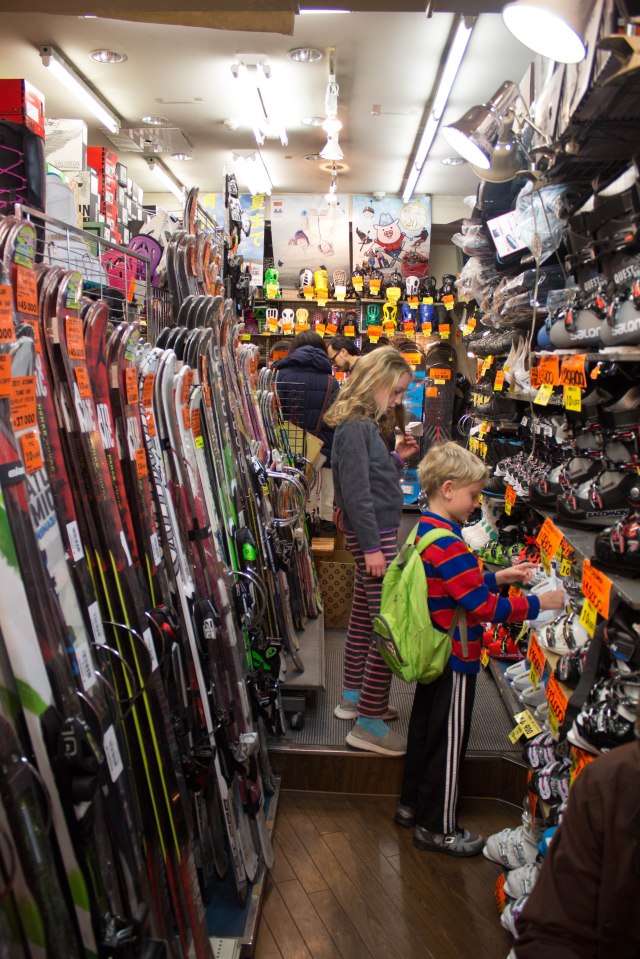 The open boxes of jumbled base layers, ski/snowboard pants, and parkas drew large crowds of determined yet well-mannered shoppers. The kids and I joined in the browsing fun while Mark checked out the skis. He found the ski selection smaller and prices slightly higher than at surrounding shops, but the boot prices were much lower. He picked up a pair of never-worn Salomon boots from two seasons ago for about one third of their original retail price, and about 25% less than the best online price. The relatively strong dollar certainly worked in our favor, as one U.S. dollar currently trades for 122 yen.

We returned to a shop we visited earlier, Vail Ski Shop. Mark settled on a pair of Rossignol skis that he researched back in the U.S. Again, thanks to the strong dollar, Mark got a deal on a never-used pair of last season’s skis. He paid about 10% lower than the lowest online price–and the online skis were used while his were brand new. 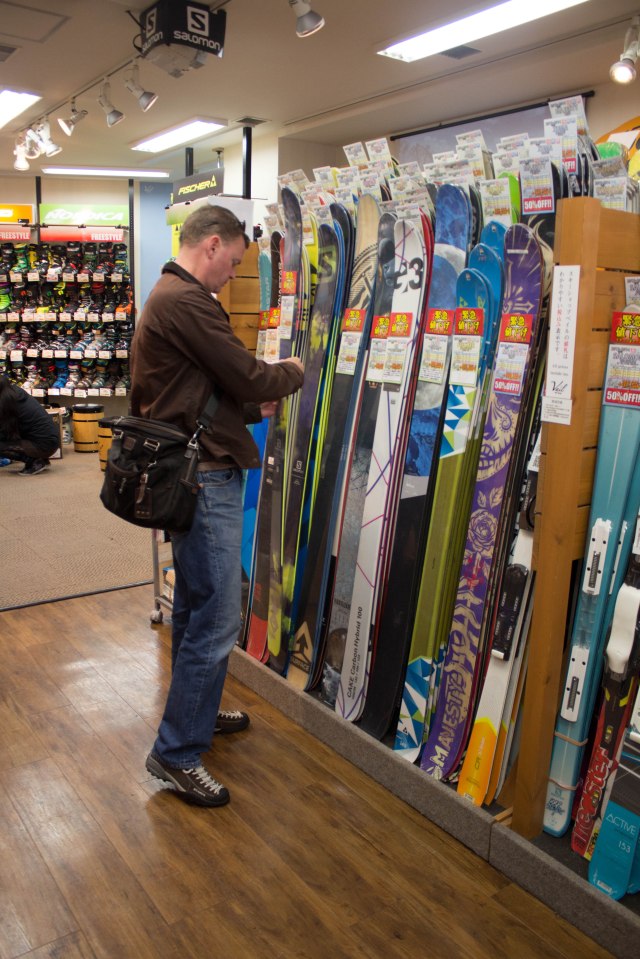 For our past ski purchases back in the U.S., ski shops required a few days turnaround to attach the bindings and set them to the correct boot size and release tension. We assumed the same for this purchase, and we were pleasantly surprised to hear of the mere 15 minute wait to get Mark’s skis slope-ready. The salesman apologized for the long wait (!). We assured him that we could wait 15 minutes.

So Mark grabbed his new gear and embarked on yet another Tokyo rite of passage: carrying skis home on the train.

We head out for our first ski trip in Japan shortly after New Year’s when we visit Nagano, site of the 1998 Winter Olympics. We will stay in a traditional Japanese hotel in Hakuba and ski the various resorts in the area. Stay tuned for our ski report!

Visiting Jimbocho Ski Street: Most shops are clustered on or around Yasukuni Dori. For Google Maps, search on London Sports Kanda or Ski Shop Vail which are both located in the center of the ski shops. Hours and acceptance of credit cards vary by store. As in all of Japan, bring lots of cash, just in case!

JANUARY 2018 UPDATE
Since that first visit to Jimbocho over two years I’ve been back several times. I bought myself ski boots in 2017 at Vail Ski Shop, the same place Mark bought his skis as described above. The boot prices at Vail weren’t the absolute lowest, but pretty close. Also I felt confident about the advice from the sales clerk who really knew his merchandise and what would work best for me. He took his time with me, and I chose to support that shop by making my purchase there instead of using his advice to buy for less elsewhere.

In addition to the shops mentioned above, you’ll find shops of all sizes along and just off Yasukuni Dori. Try to give yourself plenty of time to browse–it’s part of the fun! I went this month for a new ski jacket, and after an hour of browsing different shops I had a pretty good idea of my choices and price points.

My latest jacket purchase came from Fuso Snowboard. It’s a medium sized shop–not a teeny hole in the wall, and not a mega-store either. I liked the range of their selection, and their prices were the lowest. Since I’m a skier and not a snowboarder I can’t really comment on their board/boot inventory; I went there just for a jacket. 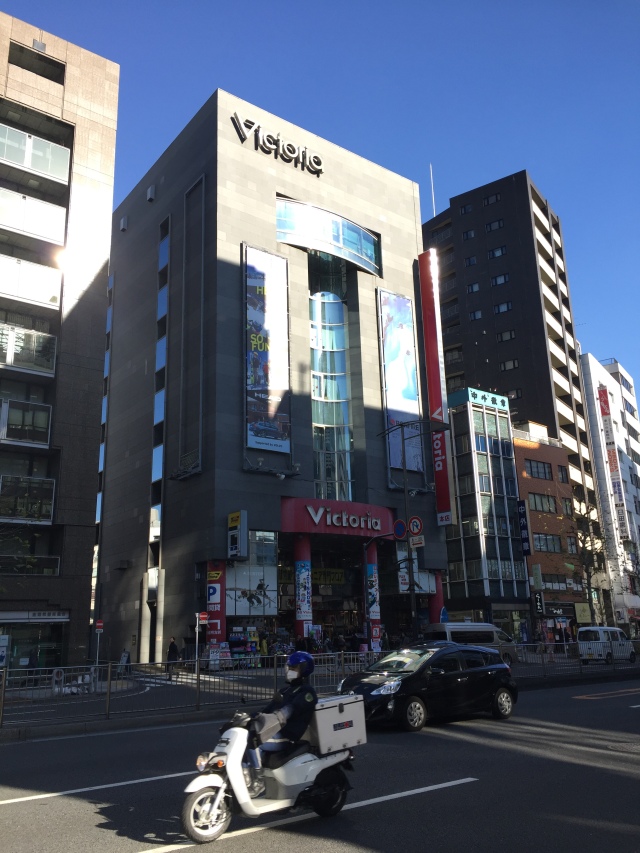 If you only have time to go to one place, make it Victoria Sports. With eight floors dedicated to snow sports–including an entire floor of ski wear, and another floor just for snowboard wear–you can find everything you need in one spot. The prices are good, too. The best deals are jacket and pants combos for around 12,000 yen total (just over $100 USD). The store is well organized, and it’s easy to find your way around. There are multiple Victoria Sports shops scattered around the neighborhood, with different buildings catering to different sports, like golf or biking. This is fairly common in Tokyo for all kinds of mega-shops.

A Note on Sizing
Clothing sizes in Japan generally run a little smaller than the West. I’m American, 5 foot 6 inches tall (167 cm), -cough, cough- lbs/kg in weight,size US Medium in clothes, size 9 US womens/40 European shoe. So in the U.S., I’m pretty average. When I try on regular Japanese clothing I’m a size Large or Extra Large, and Japanese women’s shoes don’t fit me at all.

Ski jackets and pants sold in Japan generally follow Western sizing, so I wear a Women’s Medium or Men’s Small in snow pants and jackets. But since I get cold and like to wear a fleece under my jacket, I prefer a Women’s Large. And I found that a few shops didn’t even stock Women’s Large, which is crazy–they only carried Women’s Medium and smaller. If you find yourself in such a shop, move along. There are plenty more.

Women’s ski boots top out at size 24.5, or about 8.5 US, 39 European. You can view conversion between Japanese, US, and European sizes here. If you wear a bigger size then look at men’s boots. Honestly I don’t know the largest size available for men’s ski or snowboard boots.

Also this is really rare, but it still happens from time to time: sometimes salespeople won’t let a woman try on a men’s jacket, or boots–because they men’s. They’d rather lose the sale. Also crazy, also Move Along time.

More Random Useful Information
If you’re buying a jacket, make sure that there is a small zippered pocket on the lower part of the left sleeve. Japanese ski lifts use IC card scanners set up for a pass on your left arm–you just tap and go through the turnstile, just like the train. This system is not common in the U.S., so U.S. brands don’t always have this pocket (I’m looking at you, Burton). You can buy an elastic pass case that fits over your sleeve, and it’s OK–but after the first few times of launching your pass case at lunchtime as you take off your jacket…..

Shipping Snow Gear Ahead
Don’t be That Gaijin dragging your skis or snowboard through the airport or on the train! As long as you have a two-day window before your first day on the slopes you can ship your gear like the cool kids do, using Yamato Transport Ski TA-Q-BIN. I blogged about it here. You can also ship your bags from apartments or hotels to the airport. And it’s cheap! A giant ski bag weighing about 25 kg shipped across Japan recently cost me only 3600 yen (about $33 USD) round trip (both ways).

Other martayaki Posts about Skiing and Ski Trips in Japan