According to the venerable Japan Times, the rainy season has officially started in Western, Central, and Eastern Japan (I guess the North is still dry, for now). For six weeks starting around mid-June, monsoon-like conditions can lead to puddles, mold, and general despair. Followed by nasty, humid, disgusting heat, of course. Welcome to Japanese summer!

So far the rainfall has amounted to some overcast days and rather polite, falling-straight-down rain. You know, the kind where you can actually open and use an umbrella without it immediately turning inside out and shredding.

And any rain at all means that I get to wear my fabulous Japanese rain boots!

I first noticed these boots on passersby shortly after arriving in Japan two years ago, and the boots immediately piqued my interest. Then last June I finally saw them in a store! The family plus Grandpa Don traveled to Hiroshima for a visit, and I saw the boots in a fancy boutique there. I almost passed on trying them, since anything I bought I would have to drag home on the train. But try them I did, and I was immediately smitten. I settled on classic green in the spirit of Wellington boots, recalling the words of a British friend. “You have to wear green Wellies,”he sniffed. “Only farmers wear black boots.”

I noticed the WBSJ logo on the boots and discovered that it stands for the Wild Bird Society of Japan, a non-profit organization founded in 1934 dedicated to (surprise!) bird watching. In addition to the fabulous boots, WBSJ sells other supplies like gloves, shirts, and CDs of twittering birds (the real twitter, and not the social media kind).

The Wild Bird Society of Japan website sells the boots for 4752 yen, or about $43 USD. I paid the same at the boutique in Hiroshima, and the Japanese marketplace called Rakuten charges the same price as well. I love the fact that these shops charge the same as the non-profit organization itself without mark-ups. Meanwhile US and Canadian resellers mark up the boots over 200%. I’m looking at you, Branches and Knots ($149 CAD) and Kolo ($120 USD). Sure, there are shipping, customs, and other import costs. But still.

So back to the boots! 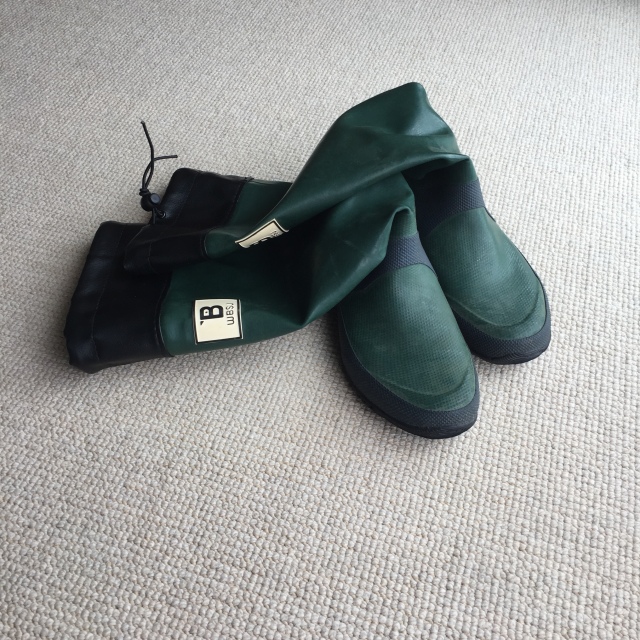 My fabulous boots have soft, pliable boot shafts, which means that I have to tighten the elastic cord to wear them full-length. That also means that I can squish them if I don’t feel like going full Robin Hood. Instead of the rather clomping, loose fit of conventional rain boots, these fit snugly around my feet. They fold up into a nifty little sack. I can change the spring-loaded buckle thingy to whatever color suits my fancy. And my favorite part: the little tabs on the sole for using one foot to pry off the other boot!

So if it’s even a little cloudy, you all know what footwear I’m rockin’.