We’re in our house! We have been here almost two weeks now. Ask anyone to picture a Japanese house, and a few images come to mind, such as the traditional…. 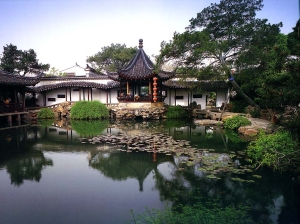 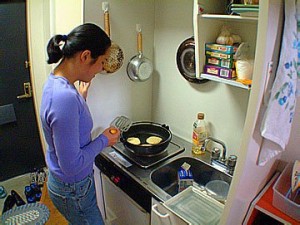 Our actual house is both larger and more mundane. Here it is! The house is named Takinoue House after our neighborhood, Takinoue.

Back in Washington DC, we had our household goods pack-out in July, before we had our house in Japan picked out. Obsessing over web listings showed that we would likely end up in a house bigger than we originally thought, but we still decided to ship very little furniture with us, just in case.  For a change, we underestimated our house size–not the typical problem when moving to Japan.

The house is roughly 2300 square feet and has four bedrooms upstairs, a small bedroom (Bonus Room, in realtor-speak) on the first floor, and family room off the kitchen, plus LDK (living, dining, kitchen).

Here’s the kitchen! We have a full-sized American fridge and even a circa-1987 GE dishwasher.

The only thing that’s not American-style is the stove and oven. I saw mostly American-style range-ovens when browsing listings online, and I assumed that we’d end up with one. Unfortunately, we did not. While the fish broiler (drawer right under the burners) is awesome, the tiny Japanese oven on the very bottom–not so much. I packed a fair amount of bakeware expecting a full-sized oven, and unfortunately only my quarter sheet pans will fit.

Our household goods arrive in two shipments. The first batch–the express shipment, by air–was limited to 1000 lb., no furniture, and no more than two bicycles. That arrived the day we moved in. The rest of our shipment including our furniture and Stuff is still wending its way across the Pacific; it should arrive some time in early October.

Meanwhile, we are making do with loaner furniture from the Navy. The housing office asks how many of each item you need, and the next day a truck brings you your barcoded furniture! It’s actually pretty great, as long as you don’t mind your house looking like the lobby of a Motel 6. Also everything has a giant barcode on the front with awesome/humorless capitalized descriptions.

Without further ado, here’s the rest of the house. Enjoy the tour! I will repost once we get our stuff set up.